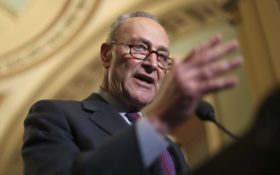 For Senate Democrats, voting against the Republican tax cuts that President Donald Trump signed into law wasn’t opposition enough. Now they have a plan to reverse some of the tax breaks for corporations and the wealthiest Americans and put the money instead toward a $1 trillion infrastructure package.

The proposal, being unveiled Wednesday, is more campaign theme than actual legislative agenda, since Republicans hold the majority in Congress. But it stands as an alternative to Trump’s approach to both taxes and spending as his infrastructure blueprint has stalled on Capitol Hill.

“The bottom line is very simple,” Senate Minority Leader Chuck Schumer, D-N.Y., told The Associated Press. “The vast majority of Americans would much prefer new, 21st century infrastructure than tax breaks for the wealthiest of people.”

Republicans are counting on the new tax law to boost their standing with voters ahead of what is expected to be a grueling midterm election that could threaten their hold on the majority.

It’s their chief legislative accomplishment since Trump became president, and Congress has not announced plans to consider the president’s infrastructure plan.

Americans had initially been cool to the $1.5 trillion GOP tax cut bill, which Republicans say will pay for itself with economic growth and Democrats warn will pile onto deficits. But it has gained favor since becoming law late last year. Some workers are seeing increased take-home pay, and some companies have granted bonuses or wage hikes.

Trump’s infrastructure proposal has seen less interest in Congress. It relies mostly on private and local government funding, with about $200 billion in federal investment.

Democrats warn that the president’s proposal would result in “Trump tolls” to pay for new roads, bridges and other infrastructure across the nation.

“We have a much better plan,” Schumer said.

Democrats would generate revenue for their $1.022 trillion infrastructure plan by reversing some of the tax cuts.

They would reinstate the top income tax rate of 39.6 percent on the highest-earning households, couples earning more than $600,000 a year, up from 37 percent under the GOP tax cuts bill.

Among other changes, the Democrats would restore the estate tax exemption at $11 million for couples, rather than double that, as became law under the GOP bill, and revive the alternative minimum tax. It would also eliminate the so-called carried interest loophole, which was left in place in the GOP bill and allows some investment managers to have their income taxed at lower rates.