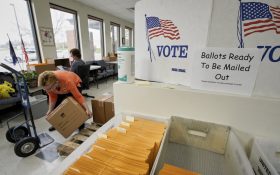 Chuck Schumer, D-N.Y. and Nancy Pelosi, D-Calif. have teamed up with the largest state in the country to roll out new voting method that Republicans say is “a wide open opportunity for fraud.”

California Gov. Gavin Newsom announced his entire state will vote by mail-in ballots in the presidential election this November.

Newsom will mail a vote-from-home ballot to every one of California’s 20.6 million registered voters.

The Democratic governor said he’s trying to minimize the number of people who will vote in-person at the polls this November. “No Californian should be forced to risk their health in order to exercise their right to vote,” he said.

Democratic leaders across the country have signed onto the voting change—but President Trump has sent out a warning that this opens the door to massive voter fraud.

Trump’s adversaries in the media have charged that the president votes by mail—but his campaign says there’s no comparison here.

“There’s a vast difference between people voting absentee by mail because they can’t be at the poll on Election Day versus mailing everyone a ballot,” Murtaugh said.

The Democrats’ plan “is a wide open opportunity for fraud.”

JUST IN: the @realDonaldTrump campaign has responded to this news out of California.. Spox @TimMurtaugh tells @CNN said this move will “undermine election security”.
Full statement:
via @DJJudd https://t.co/jSHczb9fei pic.twitter.com/fk3HHjQhSS

Election experts like Hans von Spakovsky of the Heritage Foundation point out problems like “ballot harvsting,” when one person would collect a large number of absentee or mail-in ballots, sometimes even filling them in for others.

von Spakovsky highlights hundreds of cases of bona fide voter fraud—like Richard Davis, a California man who registered his four dogs and his dead father to all vote as Democrats. On the other side of the country, Frank Rabia paid $50 for every mail-in ballot that supported his bid to win a seat on the city council of Hoboken, New Jersey. A total of 28 million mail-in ballots are currently missing.

And the Public Interest Legal Foundation found the state of New Mexico has 1,700 voters on its rolls who are dead.

What happens if the deceased get a ballot? Or the 11% of voters who move between each election have their ballots mailed to the new residents? In 2012, The New York Times admitted that voter fraud “is vastly more prevalent” for mail-in voting than in-person voting.

But left-wing pressure groups have made a national vote-by-mail plan the number one item on their agenda. MoveOn.org and Michelle Obama’s nonprofit, When We All Vote, have gone all-in to enable the new system.

They have the support of the leading Democrats in the country. Pelosi claimed mail-in ballots would secure “the integrity of the election system.”

And Senate Democrats Amy Klobuchar of Minnesota and Ron Wyden of Oregon have proposed a law that would overturn state laws: The Natural Disaster and Emergency Ballot Act of 2020 would let every registered voter vote by mail, even if state laws currently ban the practice. America “ought to have mail ballots for everyone, but we ought to allow people who want to go to the polls to be there,” Schumer told the Late Show.

Schumer basically suggested he would oppose any efforts to make the election secure. He’s refusing to allow ballots be signed in the presence of a notary.

But even supporters of mail-in voting say it’s a crisis waiting to happen. “It’s very possible that we are going to have a colossal train wreck come November,” said Michael McDonald, a political science professor at the University of Florida and leader of the United States Election Project. “There is not enough time between now and the election to purchase the equipment and do the training we need to manage a large number of mail ballots.”

This is especially true in battleground states Michigan and Pennsylvania, which Donald Trump narrowly won in 2016.

Both have switched to mail-in voting, meaning they “have little infrastructure…creating more opportunity for error,” according to Amber McReynolds, CEO of the nonprofit Vote at Home Institute. “We are falling into a black hole, and there is no way out at this point,” McDonald said. “We are going to see system failures, people unable to vote, and much litigation firing back and forth.

“We expect lots of fraud claims.”