Democrats elected a convicted pedophile on Tuesday - The Horn News 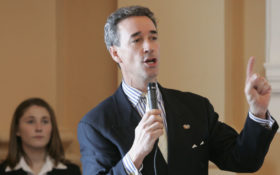 Democrats in Virginia elected a man previously convicted and served 12 months in jail (six suspended) for having sexual relations with an underage female.

Joe Morrissey was a 57-year-old delegate in the Virginia General Assembly when he pleaded guilty to a misdemeanor count of contributing to the delinquency of a minor.

Morrissey admitted he had been engaged in a sexual relationship with a 17-year-old minor that worked as a clerk at his law firm in 2014.

On Tuesday, Democrats elected him to represent the 16th district in the Virginia State Senate.

Morrissey won with more than 60 percent of the vote in his district.

“Senate District 16 is a solid blue district. Morrissey defeated the incumbent Democrat in the primary in June,” PJ Media reported Thursday. “He eventually married the girl and they now have three children, but in 2016, Morrissey was also accused of exposing himself to a female client and pressuring her to have sex, though charges were never filed.”

“He was running for mayor of Richmond at the time, and ultimately lost that election.”