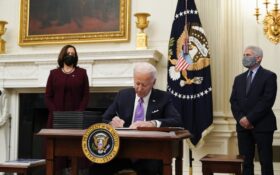 The southern border is exploding.

The Biden administration is locking more kids in cages than at any time before.

Human traffickers and coyotes are set to bring a record-breaking number of illegal immigrants into the U.S.

And President Joe Biden doesn’t “have a plan” for this “crisis,” and his open borders policy is “actually feeding the narrative” that drug cartels use to rape, torture, and traffic their victims.

That’s not my opinion — that’s the view of influential Democrats in Congress, whose votes Biden needs to pass his left-wing agenda.

Although White House spokeswoman Jen Psaki has repeatedly refused to describe the powder keg on the border as a “crisis,” Biden’s fellow Democrats have told it like it is — and pinned the blame on the president.

Sen. Kyrsten Sinema, a Democrat from the border state of Arizona, wrote Biden a letter telling him to “use your full authorities to effectively respond to and successfully manage the ongoing crisis at our Southwest Border.” Biden and his underlings “need to increase appropriate resources and qualified staffing at the Southwest Border to meet this challenge,” she wrote in a letter with Republican Sen. John Cornyn of Texas.

The pink-haired senator from the swing state used to be a radical left-wing activist, but now she’s considered a “centrist.”

That’s not the case with Rep. Sheila Jackson Lee, D-T.X., who shouts her liberal politics even louder than the pink cowboy hats she wears.

She’s no fan of Trump. But even she said Biden’s border policy “does not look like it’s working.”

Yet and still that’s even way better than how liberal Democratic Sen. Mark Kelly feels about Biden’s handling of the immigration issue. “We currently don’t have a plan” to deal with the immigrants flowing over the Mexican border, he said.

And Biden caused the whole thing, said a Democrat in neighboring Texas.

Rep. Henry Cuellar, D-Tex., said that Biden’s so-called “‘humane’ approach is actually feeding the narrative that the bad guys are twisting to get people over” the border. “I know this from talking to people on the ground in Mexico who have dealt with this problem for many years.”

As a candidate, Biden promised to end all deportations, give illegals “free” healthcare, and put them on “a pathway to citizenship.” Thanks to those promises, some illegals show up at the border wearing Biden campaign paraphernalia.

Now, even Democrats say that has to end.

Other Democrats are tired of the Biden administration using their districts as dumping grounds that he doesn’t have to worry about from the Oval Office in D.C.

“The fact is that my heart goes out to everyone,” said Rep. Vicente Gonzalez, D-Tex. “But for thousands of people to be reaching our border in the middle of a pandemic in a disorderly fashion would be catastrophic to my district.”

He sounded a lot like Republican Sen. Tom Cotton, R-Ark., who said, “President Biden’s border crisis is a superspreader event.”

But Gonzalez is a liberal who’s called for the Biden-Harris administration to force Central American caravans “to ask for asylum in their home countries or their neighboring countries.” That was required by the Trump administration’s Migrant Protection Protocols — which Biden of course rescinded.

Biden defended nixing the “Remain in Mexico” policy last Thursday, saying he made “no apologies” for his stance.

“This policy forces (illegals) to make a 2,000-mile walk that is very dangerous, and they’re getting raped and pillaged along the way,” said Gonzalez.

Although Biden has blocked reporters from covering detention facilities, pictures have surfaced of children piled on top of each other, sleeping under mylar blankets on mattresses laid directly on the concrete floor.

Still, that doesn’t keep them from coming by the thousands. DHS Secretary Alejandro Mayorkas said the U.S. is “on pace to encounter more individuals on the southwest border than we have in the last 20 years.”

Biden set a record for the largest number of children in custody: 5,767 as of Sunday, and they’re expecting more — a lot more — as many as 158,000 by September.

By then, the whole Democratic Party may have turned its back on Biden — along with the rest of the American people.