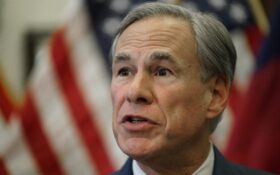 Hispanic voters have made a very public shift away from the Democratic Party and towards the Republicans — but nobody makes as dramatic a change as these two Texas Democrats… especially when you find out why they switched parties.

Two Hispanic, Democratic, female judges in the Lone Star State have changed their party registrations and plan to run for reelection as Republicans this year—because they say the Democratic Party destroyed their home counties with an unsecured border.

Terrell County Judge Dale Carruthers and Presidio County Judge Cinderela Guevara had been part of the Democratic Party for decades, but Joe Biden’s border policies drove them to cross the boundaries of another party.

“The chaos on the border and everything that’s been going on makes me realize that I need to switch parties,” Carruthers said at a recent campaign stop with the state’s Republican governor, Greg Abbott, who threw his support behind her. “I am very happy to be a Republican.”

“I come from a Hispanic heritage, which was prominently Democrat. The chaos at the border and everything that’s been going on makes me realize that I needed to switch parties,” Carruthers continued.

Guevara seemed just as surprised to be leaving her home party after three decades. “I’ve been a Democrat since 1992. I’ve always ran as a Democrat and this is my first year to run as a Republican,” the judge told the media. “I’m very grateful for Gov. Abbott for all he has done for Texas and continues to do for Texas, especially with our border crisis.”

The word “crisis” doesn’t begin to describe things. Both judges come from counties that declared illegal immigration represents a full-blown national emergencies. Several counties in Texas made the declaration so far, believing that would give Abbott new powers to fight the unending tide of illegal immigrants flooding their communities.

“Judge Dale Carruthers switched parties due to Biden’s FAILED open border policies. She’s now running for re-election as a Republican, joining a growing number of Hispanics who have walked away from the Democratic Party,” tweeted Gov. Abbott in a video of his appearance with Carruthers. “Together, we’ll secure the future of Texas.”

She's now running for re-election as a Republican, joining a growing number of Hispanics who have walked away from the Democratic Party.

Together, we'll secure the future of Texas. pic.twitter.com/dVjrmhNJop

She was a life long Democrat until the Democratic Party walked away from her.

She's now running as a Republican because she supports our mission to secure the border & the future of the Lone Star State. pic.twitter.com/x93U6YKaaq

Under Joe Biden, border “encounters” have soared through the roof.

America looks poised for a record-breaking 2.1 million border “encounters” in the the upcoming fiscal year, according to numbers from the Biden administration’s Customs and Border Patrol. That would break the previous record of 1.7 million set in Biden’s first term.

Carruthers called the flow an invasion, and she said every language on earth had been represented. That raised the possibility of terrorist penetration of the border.

Of course, it’s not just people who cross the border. Drug dealers from Mexico continue to pump deadly fentanyl through the open veins of the southern border. Just last week, border agents announced they seized 200 pounds of the murderous synthetic opioid in the San Diego sector. But Texas has experienced similar trafficking—of both drugs and people—but Biden has ignored their pleas to make it all stop.

Things got so bad that Abbott began busing illegal immigrants back to Washington, D.C., former District Mayor Muriel Bowser to call out the National Guard.

Those few thousand illegals are nothing compared to what Texas experiences.

“We are trying to protect the sovereignty of Texas,” Carruthers said. “I am a constitutional judge and we are standing behind the constitution.”

These are two dramatic examples of an already a change brewing among Hispanic voters. President Donald Trump made an eight-point gain with Hispanics in 2020, compared to 2016. Right now, only 19 percent of Latinos say they support Joe Biden , who won 61 percent of their votes.

Districts in southern Texas are flipping from blue to red. Even some Democrats in the area, like Rep. Henry Ceullar, D-Texas, had to run as a pro-life border hawk in order to survive.

What’s behind the change? What made Cinderela wake up?

One thing is for certain: These “wise Latinas” are blazing a trail that could realign the political parties, and American politics, for decades to come.