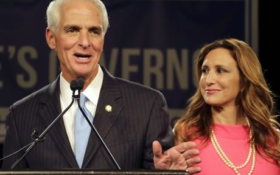 Democratic U.S. Rep. Charlie Crist is getting divorced less than nine years after becoming the first Florida governor in 42 years to get married while in office.

Crist spokesman Kevin Cate said the congressman filed papers Friday seeking to divorce his wife Carole, who he proposed to in 2008 after a 10-month romance. He was a Republican governor at the time

Their St. Petersburg wedding was a grand event with an exclusive guest list of political elite and celebrities.

The couple stayed together through his switch from Republican to independent to Democrat and his unsuccessful 2010 U.S. Senate and 2014 gubernatorial campaigns.

The former Carole Rome was a New York businesswoman and socialite when the couple met. She is Crist’s second wife. He married his college sweetheart in 1980 and divorced less than a year later.