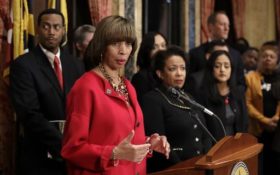 How bad are things in Baltimore, Maryland?

So bad, the city’s newly-elected Democratic mayor is going to President Donald Trump to ask for help with their murder problem.

In a city as blue as Baltimore, that’s a risky political move for sure.

Pugh is asking for federal help to boost the city’s crime fighting efforts.

“Murder is out of control, too many guns on our streets, domestic violence is increasing in our city,” Pugh said in a Wednesday press conference.

That includes Trump’s administration and the FBI.

“I’m calling on all the assistance that we can possibly get because I can’t imagine going into the summer months with the crime rate that it is today, what that’s going to look like by the end of the summer,” Pugh said.

Critics note that Baltimore has some of the strictest gun laws in the country, but that these restrictions haven’t prevented criminals from arming themselves.

More than 100 murders have occurred in Baltimore since 2017 began. In 2016, the city was rocked by 318 murders, the second highest per-capita homicide rate in city history.