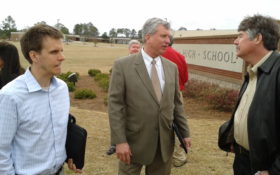 A young, progressive mayor of an Atlanta-area city on Sunday dropped out of the Democratic race to challenge Republican Sen. David Perdue in a contest that could dictate the fate of the Senate in 2020.

Ted Terry told The Atlanta Journal-Constitution that he struggled to raise enough money to compete in the nationally watched race. Terry said he will instead run for an open DeKalb County commission seat.

“The old saying that it takes coal to run a train, but it takes gold to run a campaign is more true in this age of politics than ever before,” Terry said in a letter to supporters. “And while the thousands of you who have pitched in has made a huge difference, it just isn’t enough to sustain us all the way to the May 19th primary.”

Terry has been the mayor of Clarkston since 2013. The city bills itself as “the most ethnically diverse square mile in America,” and is known for embracing progressive and immigrant-friendly policies.

As mayor, Terry has promoted a $15 per hour minimum wage for city employees, decriminalization of marijuana possession and clean energy goals.

He declared his Senate candidacy in July at the age of 36.

But he’s perhaps best known outside town for getting a makeover in a 2018 appearance on Netflix’s “Queer Eye” show. The episode was titled “Make Ted Great Again” — a swipe at Trump’s campaign tag line.

Two Senate seats are up for grabs in Georgia this year after Sen. Johnny Isakson’s retirement opened a second Senate race, ensuring the state’s status as a 2020 battleground.

“We must win both seats to end Mitch McConnell’s ‘graveyard’ of bills that advance goals like improving healthcare access and reducing gun violence, and put a stop to his packing of our federal courts with right wing extremist judges,” Terry wrote to his supporters Sunday. “I believe I can best contribute to that effort at this time by building Georgia’s progressive statewide grassroots network rather than being a Senate candidate myself this year.”