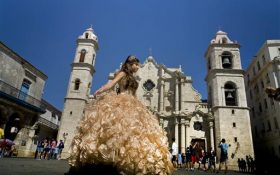 Cuba is starting an electoral process that is expected to end with President Raul Castro stepping down in February.

Castro has said he’ll step down as president in February, although he is expected to remain head of the ruling Communist Party.

Above the municipal level, Cuban elections are choices between candidates preselected by the Cuban Communist Party and related organizations. That guarantees that the country’s nominally representative bodies in practice answer to the president and a small group of high-ranking officials.