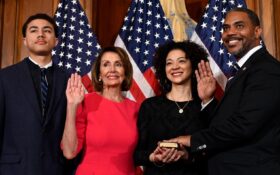 House Speaker Nancy Pelosi, D-Calif., hopes to keep — or expand — Democratic control of the House of Representatives in the 2020 general election this fall.

An explosive sex scandal developing from a key Nevada swing state could threaten that plan.

The re-election efforts of Rep. Steven Horsford, D-N.V., were suddenly cast into doubt after the married man admitted Friday he was previously involved in a “relationship outside of my marriage.”

Gabriela Linder, a former aide to Sen. Harry Reid, told The Las Vegas Review-Journal she was Horsford’s mistress between 2009 and 2019. Linder said she began the affair when she was just 21 years old — 15 years younger than Horsford.

“It is true that I had a previous relationship outside of my marriage, over the course of several years,” Horsford admitted to The Las Vegas Review-Journal.

“I’m deeply sorry to all of those who have been impacted by this very poor decision, most importantly my wife and family,” he said. “Out of concern for my family during this challenging time, I ask that our privacy is respected.”

In her podcast confession, Linder said Horsford used his political connections to get her interviews and offered her “financial support.”

“He knew how in love with him I was, and he knew what he could do and get away with,” she told The Las Vegas Review-Journal. “He knows I would support him. He never told me to keep quiet. He didn’t have to. He knew I was loyal to a fault.”

Linder and other critics have called for Horsford to immediately resign his Congressional seat.

This could be bad news for Pelosi and top Democratic Party leaders.

Song Sutton said if she unseats Horsford, she will “fight fire with fire” in Washington, D.C. and vows to challenge Pelosi’s “socialist squad” in Congress.

She has also called for Horsford’s resignation and demanded an immediate House Ethics Committee investigation into Horsford.

2020 is the year for private sector individuals like myself to come off the sidelines and stand up for our communities.

Pelosi and her Socialist Squad have had their turn. We must fight fire with fire and FLIP this seat!

Song Sutton is among the two favorites heading towards the Republican 4th congressional district primaries, which will be held on June 9.

The winner of that primary will challenge Horsford for the House seat in the battleground district.