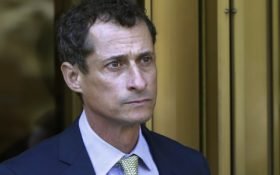 A notorious Democratic pedophile has just gotten his third chance at public prominence—and he’s not even willing to say for certain that he’s changed!

Former Congressman Anthony Weiner, D-N.Y. — a self-proclaimed sex addict who did time for trying to groom a 15-year-old girl with sexual explicit messages in 2016 — is back and on the airwaves.

He’s hosting a new radio show called “The Left vs. The Right” on 77 Talkradio WABC with Curtis Sliwa.

Sliwa, the longtime leader of the Guardian Angels, ran as the Republican candidate for the mayor of New York City last November but got bested by Democrat Eric Adams.

Weiner didn’t make much of an impact on Hannity Monday night, when he and Sliwa went on “Hannity” to announce the launch of their show.

Hannity opened by asking Weiner whether he had changed.

Weiner stared blankly into the camera and paused for a long time before offering a weak, “Well… I think so.”

With a weak answer like that, Hannity nailed Weiner to the wall.

Weiner got defensive. “I’m not out to persuade you or anyone else that I’ve changed,” Weiner responded.

He said people can “judge for themselves” — which never came close to convincing Hannity of his sincerity.

One thing is beyond any doubt: Weiner has had his share of scandals.

In 2011, he accidentally posted racy pictures of himself on his official Twitter account; it turned out he had been sexting with women privately for some time. After refusing to step down for three weeks, he eventually resigned in disgrace—as one of Howard Stern’s sidekicks heckled him throughout his resignation speech!

In the middle of his scandals, his wife — Huma Abedin, top aide to Hillary Clinton — thought he had just the steady leadership that New York City needed.

“I had encouraged him to run for mayor. I did think that he was a good public servant and I thought this was a way back for him,” Abedin said.

But then he got busted, back at his old tricks, sending sexually explicit pictures to people while using the name “Carlos Danger.”

It turned out one of those girls was 15 years old who said Weiner — who was more than triple her age — would ask her to dress up in schoolgirl outfits and live out “rape fantasies.”

Weiner told a judge at his sentencing in September 2017 he had been “a very sick man for a very long time.”

To complicate matters, during the investigation, officials found emails between Abedin and the then-Democratic presidential candidate, Hillary Clinton, on Weiner’s laptop.

Weiner began serving a 21-month sentence at a minimum-security prison in Massachusetts that November, but in May 2019 he was released after just 18 months.

Weiner even admitted he went back to the scene of his last crime.

“Yeah, I got this,” Weiner told the New York Post last summer… which sounds like he’s pretty confident.

Whether any parent should be confident enough to leave their daughter unguarded with him is another question.