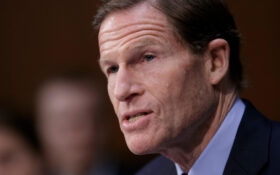 Moderate Democrats have been desperately trying to distance the party from the radical socialist leanings of its progressive caucus ahead of next year’s midterm elections.

But that task just got a lot tougher as a key lawmaker was caught speaking at a communist-sponsored event last weekend.

“I am really excited and honored to be with you today and share in this remarkable occasion,” Blumenthal said, according to the Connecticut-based Yankee Institute think tank.

The “remarkable occasion” was the People’s World Amistad Awards, held “on the occasion of the 102nd anniversary of the Communist Party USA” and hosted by the Connecticut People’s World Committee.

Blumenthal, one of the Senate’s most liberal members, didn’t seem to mind as he handed out certificates to the award winners.

“There’s a lot to be working for in economic justice, in racial equity, in establishing a $15 minimum wage and holding corporations accountable for the basic treatment of the American people,” he said during his speech at the event. “We need to look at our entire tax system, beginning with Build Back Better.”

Blumenthal was not listed in the advanced material sent out promoting the event, but instead appeared as a “surprise guest,” according to Fox News.

The Yankee Institute said Blumenthal also used his time on the stage to promote reelecting Democratic lawmakers and ending the filibuster, the measure that allows individual senators to block legislation in the absence of a 60-vote supermajority.

That’s already a tough sell to American voters, as inflation under the Biden administration has sent the party’s approval rating into free fall.

It’s likely to be tougher still when voters hear that Blumenthal was proudly speaking at an event hosted by People’s World, a Marxist news organization that says it “traces its lineage to the Daily Worker,” the infamous communist newspaper.

“People’s World continues to feature Marxist analysis and opinion developed by the Communist Party as well as voices from other currents of the labor and people’s movements,” the organization’s website says.

The event’s emcee reportedly announced the goal of creating “a new socialist system that puts people, peace, and planet before profits.”

One speaker even issued an open call for people to embrace communism.

“If you are not already part of the Communist Party, we invite you to participate and contribute and join,” party member Lisa Bergmann – who had introduced Blumenthal – said after his speech, according to the Washington Free Beacon. “There’s more and more people talking about socialism in this country as it becomes more and more clear that capitalism is not going to work for our future.”

Bergmann, an organizer for the Young Communist League USA, celebrated the Communist Party as an “amazing organization.”

The New York Post slammed Blumenthal as a “dolt” for attending the communist event.

“Plainly ignorant of the CPUSA’s long history of playing garden-variety leftists as patsies, he blithely presented certificates of special recognition to the night’s three ‘Amistad Award’ winners, insisting they ‘honor the great tradition of activism and standing up for individual workers,’” the editorial stated.

Blumenthal is one of the most liberal members of the Senate. Ironically, he is also one of the wealthiest: OpenSecrets currently ranks him third, with a net worth of more than $81 million.

At least some of his fortune is from real estate, with the Free Beacon noting that includes an investment in a firm doing business with a state-owned company building a “luxury shopping resort next to Shanghai Disneyland.”

A spokesperson told the newspaper earlier this year that he was unaware of the investment.