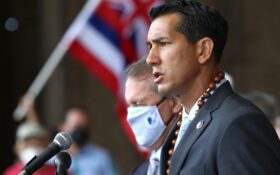 Imagine you just stopped showing up to your job but kept getting paid for it, anyway.

That seems to be what a Democratic congressman — a member of the second-highest elective body in U.S. government — is doing, and he’s laughing all the way to the bank.

You may not have heard of Rep. Kaiali’i Kahele, D-Hawaii… and nobody in Washington has heard from him in quite a while, either.

Rep. Kahele, who usually goes by Kai, seems to have been absent from the U.S. Capitol since January, even to vote.

He voted on bills in person for three days in January. Then he said, “Aloha!” and flew back to Hawaii… and he hasn’t been spotted in D.C. since.

It looks like he’s milking COVID for all it’s worth. “I continue to be unable to physically attend proceedings in the House Chamber due to the ongoing public health emergency,” he wrote to leaders of the House of Representatives leaders on April 4.

He’s been exploiting a rule that lets congressmen vote “by proxy”: Kahele tells another congressman how to vote, and the other congressman votes in Kahele’s place. Basically, it’s like telling one of your co-workers, “Cover for me” before you go out for a cigarette break.

Kahele’s office says there’s no problem. Thanks to proxy voting, the absent congressman has “not missed a single vote this year.”

That’s pretty ironic, considering Kahele got elected to Congress by criticizing former Rep. Tulsi Gabbard of not spending enough time in the House doing the people’s work, due to her 2020 presidential campaign.

“What Hawaii needs is a full time representative in Congress who will show up and whose sole focus is fighting on behalf of the people of the 2nd Congressional District,” Kahele told Vice News. “That’s the message I will be bringing to the people of Hawaii.”

Then he got elected… and quickly left the job of making laws to other lawmakers.

Kahele may have lots of problems, but he’s not really afraid to work. He’s been flying planes as a commercial pilot for Hawaiian Airlines.

Punchbowl News says his office says he was “cleared” to keep “moonlighting” for the airline — a job where he earned $120,000 in 2020, according to House filings.

Add his flight pay to his $174,000 salary as a congressman, and the Democrat could be flying high financially.

The congressman’s office said there’s no problem: Kahele’s “outside employment is in accordance with rules set by the U.S. House Committee on Ethics.”

Kahele has said his outside job gives him a unique perspective as a member of the House Transportation and Infrastructure Committee, but there’s another problem: Hawaiian Airlines has lobbied that committee.

According to Punchbowl News, “this means that Kahele is collecting a salary from a company that is trying to lobby the federal government, and more specifically the committee on which he serves.”

That’s right: The airline that signs Kahele’s checks lobbies the committee where he works.

Not only that, but the Hawaii Democrat pocketed a $2,500 donation from the Hawaiian Airlines Inc. PAC — formed by his airline — in June 2021. He’s cashing in all over the place and flying away with the proceeds.

“I presume Democratic leadership would prefer for him to be there so I think it’s legitimate for the public to question why he’s not,” said John Hart, a professor of communication at Hawaii Pacific University. “For most of us if we don’t show up for work people ask why. If we don’t have a good reason then there are consequences.”

What does House Speaker Nancy Pelosi think about Kahele’s absences? She’s not saying: She refused to give any comment to media outlets who asked about it.

When are the Democrats going to send out the truant officer to get Kahele back to work?

Kahele may have a hard time working, but he does not have a problem with holding a job. He’s already looking for the next position: Running for governor of Hawaii.

Maybe he can collect yet another check without working, the kinds of jobs that only seem to be available to people like Kahele, Hunter Biden, or other Democrats.

Nice “work” if you can get it.