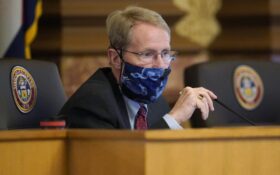 An El Paso County grand jury has indicted a Democratic lawmaker, Colorado state Sen. Pete Lee, on one count of voting outside the district where he resides in 2020, in violation of state law. Lee, chair of the chamber’s judicial committee, vigorously denies the charge, an attorney for the lawmaker says.

It alleges Lee, whose formal name is Sanford Edmund Lee, “voted giving false information” about his place of residence during the presidential primary on March 3, 2020, The Colorado Sun reports.

Lee declined comment on the charge, saying he’d just learned about it.

But he said he’d requested to be removed from interim committees on judicial discipline and behavioral health in the criminal justice system “to avoid having my personal circumstances become a distraction,” according to a statement.

David Kaplan, an attorney representing Lee, said in a statement the charge “will be vigorously challenged.”

The felony charge carries a possible penalty of one to three years in prison and a possible fine of up to $100,000. An initial hearing in El Paso County court was set for Sept. 8.

Lee is not seeking a second term in November’s election after being elected to represent his El Paso County district in 2018. He previously served in the House.