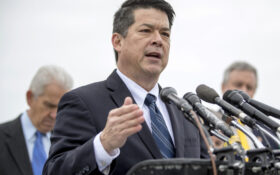 Terrance “T.J.” Cox was arrested by agents with the Federal Bureau of Investigations in Fresno, where he was booked to the Fresno County jail on a U.S. Marshals hold, jail records showed. It was not immediately known if he has an attorney who can speak on his behalf. An email message sent to Cox Tuesday was not immediately answered.

Cox, a Democrat, just left Congress last year — he represented the 21st Congressional District from January 2019 to January 2021. The district is in the agriculture-rich San Joaquin Valley and includes Kings County and portions of Fresno, Kern, and Tulare counties.

Talbert said that between 2013 and 2018, Cox allegedly obtained $1.7 million from funds he solicited from clients and loans he got for his companies and then stole by diverting the money to “off-the-book bank accounts.”

Cox partially owned, managed, and was employed by several companies and non-profit organizations, including a business that helped companies get loans and federal tax credits, an almond processing company, and a non-profit that operated Granite Park, a recreation facility in Fresno, according to the complaint.

After his nonprofit could not qualify for the construction loan for the recreation facility without a party guaranteeing the loan, Cox said that one of the companies he co-owned would guarantee the loan, and submitted a fabricated board resolution that falsely stated that during a meeting all company owners had agreed to guarantee the Granite Park loan.

“No meeting took place, and the other owners did not agree to back the loan,” Talbert said.

The loan later went into default, causing a loss of more than $1.28 million, he said.

According to the indictment, when Cox was campaigning in 2017 for the U.S. House of Representatives he reimbursed family members and associates for donations to his campaign, prosecutors said.

Cox arranged for over $25,000 in illegal straw or conduit donations to his campaign, Talbert said.