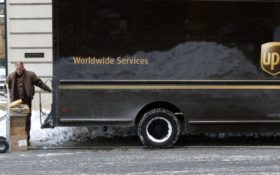 An Amazon delivery driver stole a package that was delivered earlier by UPS at a Pennsylvania home, police said.

A woman in Wilkes-Barre reported a package being stolen from her home Monday.

Surveillance footage showed a UPS driver dropping off a package at the house. Later that afternoon, an Amazon driver dropped off two packages and took the UPS package as he was leaving.

Wilkes-Barre police said charges will be filed once the Amazon driver is identified.