Delaware emu panic at an end - The Horn News 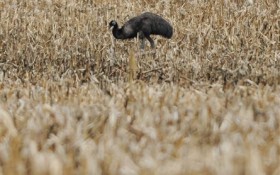 An emu whose escape more than 60 days ago prompted lockdowns at two Delaware elementary schools has been captured.

Daniel Shortridge is a spokesman for the state Department of Agriculture. He is quoted by The News-Journal of Wilmington as saying that private parties and state officials netted the flightless bird Thursday afternoon at the Stonefield housing development near Odessa.

Dan Stonebraker is co-owner of 3 Palms Petting Zoo in Clayton. He says the bird has been put in a trailer and will be moved to a secure facility.

Over the past week, authorities have received a growing number of calls from people who had spotted the bird or come close to hitting it.