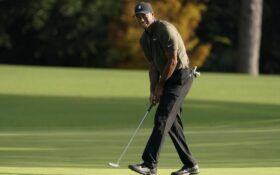 Considering all the things they do control, it’s comforting to know the weather remains beyond the reach of the green jackets at Augusta National.

Already short on daylight after the pandemic pushed the Masters back from April to November, they looked on helplessly as early thunderstorms stole three precious hours and turned Round 1 into something resembling one-half.

When darkness halted play at 5:30 p.m. EST, there were 44 players still on the course and 48 who’d turned in complete scorecards, led by 43-year-old Englishman Paul Casey, with Webb Simpson, Xander Schauffele and Justin Thomas (who only played 10 holes on Thursday) two strokes back. All told, there were 50 players in the red when the horn sounded.

Like them, Casey took full advantage of a rain-softened course to fire 65 — an astounding 16 shots better than his opening round there in 2019, prompting this cheeky assessment:

“To be honest, you rarely walk off this golf course going, ‘It could have been two or three better.’ But it kind of felt that way,” Casey said. “I don’t want to be greedy. I’m very, very happy with my 65.”

Scattered throughout that admittedly small sample of four dozen finishers, however, were a few other mild surprises.

Five-time and defending champion Tiger Woods dropped a turn-back-the-clock round of his own, relying more on experience than current form to post a 68.

Woods has been a non-factor in the majors since his electrifying 2019 Masters triumph and played just six events since golf’s return. He’s still battling nagging injuries and his best finish this season is a tie for 37th at the PGA Championship. He missed the cut at the U.S. Open in September. No matter. Something about the Masters has always been a balm for what ails him.

“There is a sense of ease when I come here, just because I understand how to prepare for this golf course,” Woods said after hitting 10 of 14 fairways and 15 of 18 greens.

Small wonder, then, that Woods flashed a wide grin when asked what was most encouraging about the round.

That catch-all conveniently describes Bryson DeChambeau’s outing as well. His plan to cut Augusta National down to size featured plenty of booming drives, but only a few that landed where DeChambeau aimed them.

He spent enough time in the trees and azalea bushes looking for his golf ball that depending on when you tuned in, he might have been mistaken for a member of the landscaping crew.

For all that, DeChambeau showed grit and patience throughout, recovering from a 2-over start after four holes to a post a 2-under 70. He also expressed some hard-earned respect.

“This golf course, as much as I’m trying to attack it, it can bite back,” he said. “It’s still Augusta National, and it’s the Masters. It’s an amazing test of golf no matter what way you play it.”

But we don’t just have DeChambeau’s word on that. Larry Mize, 62, who has a standing invite because he also happens to be the 1987 Masters champion, shot the same 70, despite driving the ball, on average, roughly 100 yards shorter than DeChambeau.

Round 1 resumes at 7:30 a.m. and don’t sleep on the stragglers. Besides Thomas, who ran off six birdies in those 10 holes, there are at least three other players with a chance to slip past Casey on the leaderboard.

In pursuit at 4 under are 2013 Masters winner Adam Scott (through 10), Matthew Wolff (through 11) and Dylan Frittelli (through nine). Lurking another shot back after his first nine holes is Dustin Johnson, the world No. 1 and second-favorite to DeChambeau in pre-tournament wagering.

Still to be determined is how much firmer the greens and the rest of the golf course will get. The forecast calls for partly cloudy skies and temperatures climbing to the upper 70s, but the green jackets can’t dictate the conditions of the course in autumn as precisely as they can in springtime.

With that in mind, Casey suggested the rest of the field should pocket every shot while they still can.

“I hit a 6-iron to a left-hand pin on No. 2, and you can’t hit that shot in April,” Casey said. “Today, it just pitched and stopped instantly. In April, it would have one-hopped over into the patrons. I probably make five, not three.”