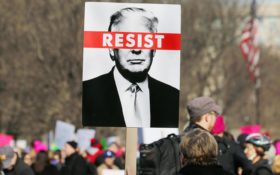 A federal ethics company is telling employees of the federal government to avoid discussing the “resistance” or potential impeachment of President Donald Trump in the workplace for the next 705 days — the day after the 2020 presidential election.

Talks have gotten so bad, it’s hurting the working enviroment. Federal employees were officially warned if they discuss the Trump “resistance” at their office, they run the risk of violating the Hatch Act, which bars federal employees from partisan political activity on the job.

The Office of the Special Counsel handed the order down on Tuesday and stated federal employees must not engage in “strong criticism or praise of a presidential administration’s policies and actions.”

The new rule states, “‘resistance,’ ‘#resist,’ and similar terms have become inextricably linked with the electoral success (or failure) of the president.” Federal employees are no longer allowed to use those terms at work.

The document also explains that federal employees must not advocate for Trump’s impeachment.

“Advocating for a candidate to be impeached, and thus potentially disqualified from holding federal office, is clearly directed at the failure of that candidate’s campaign for federal office,” the guidance says, according to The New York Times.

It adds, “Similarly, advocating against a candidate’s impeachment is activity directed at maintaining that candidate’s eligibility for federal office and therefore also considered political activity.”

The reason is that, as of now, Trump is the only candidate who has officially announced he will be running the in 2020 election.

The guidance explains that supporting the removal of the president from office amounts to taking a stand against his potential re-election in the future.

Ana Galindo-Marrone, chief of the OSC Hatch Act unit, said she does not believe the guidance was written any different from existing standards.

“To me, it’s no different from the language we’ve used before,” she told National Public Radio.