Illegal immigrants are in BIG trouble (unless the Dems...) - The Horn News 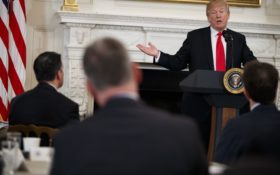 Democrats have stopped negotiating with President Donald Trump on the so-called ‘Dreamer’ illegal aliens — but if they don’t come to the table soon, their DACA recipients are in big trouble.

The Supreme Court on Monday rejected the Trump administration’s bid to bypass a federals appeals court and get the justices to intervene in the fate of a program that protects hundreds of thousands of young immigrants from deportation.

But that doesn’t mean it’s done. It only means the case will have to work its way through the lower courts before any Supreme Court ruling is possible.

And because that could take weeks, Monday’s decision also is likely to further reduce pressure on Congress to act quickly. The Senate stalemated on the matter two weeks ago, leaving any further congressional action in doubt.

The Supreme Court’s decision for now to stay out of the case on the Obama-era Deferred Action for Childhood Arrivals program, or DACA, wasn’t surprising. It’s highly unusual for the Supreme Court to hear a case before a lower appeals court has considered it.

Trump said the case would now be heard by an appeals court and “we’ll see what happens from there.”

“You know, we tried to get it moved quickly because we’d like to help DACA. I think everybody in this room wants to help with DACA,” he said to visiting governors. “But the Supreme Court just ruled that it has to go through the normal channels.”

DACA has provided protection from deportation and work permits for about 700,000 young people who came to the U.S. as children and stayed illegally.

In September, Trump argued that President Barack Obama had exceeded his executive powers when he created the program. Trump announced he was ending the program effective March 5 and gave lawmakers until then to come up with a legislative fix.

But in recent weeks, federal judges in San Francisco and New York have made Trump’s deadline moot…. temporarily. They’ve issued injunctions ordering the administration to keep DACA in place while courts consider legal challenges to Trump’s termination. As a result, U.S. Citizenship and Immigration Services has been accepting and processing DACA renewals, just as it had before Trump’s September announcement.

The Trump administration has not tried to block the injunctions that force it to continue operating the program.

The Supreme Court’s announcement Monday that it wouldn’t step in means the U.S. Court of Appeals for the Ninth Circuit will likely be the first appeals court to weigh in on the topic, the step before the case would return to the Supreme Court. The Ninth Circuit has set no date to hear arguments but has given lawyers dates by which they must file briefs that run through April.

And once it’s before the Supreme Court, it may be too late for the Democrats.