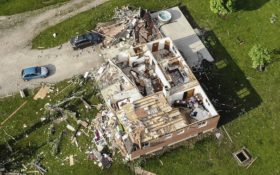 A rapid-fire line of apparent tornadoes tore across Indiana and Ohio overnight, packed so closely together that one crossed the path carved by another.

There were no immediate reports of any deaths or serious injuries in the twisters, among 52 tornadoes that may have touched down Monday across eight states as waves of severe weather swept across the nation’s mid-section.

At least half a dozen communities from eastern Indiana through central Ohio suffered damage, according to the National Weather Service. The storms damaged homes, blew out windows, toppled trees and left debris so thick that at one point, highway crews had to use snowplows to clear an interstate.

In Indiana, at least 75 homes were damaged in Pendleton and the nearby community of Huntsville, said Madison County Emergency Management spokesman Todd Harmeson. No serious injuries were reported in the area or other parts of the state.

The National Weather Service said a survey team will investigate damage in Madison County and possibly in Henry County. Another team may survey damage in Tippecanoe County.

Some of the heaviest hits were recorded in towns just outside Dayton, Ohio, where officials were still assessing damage.

In Vandalia, about 10 miles (16 kilometers) directly north of Dayton, Francis Dutmers and his wife were headed for the basement and safety Monday night when the storm hit with “a very loud roar.”

“I just got down on all fours and covered my head with my hands,” said Dutmers, who said the winds blew out windows around his house, filled rooms with storm debris, and took down most of his trees. But he and his wife were not injured and the house is still livable, he said.

The National Weather Service tweeted Monday night that a “large and dangerous tornado” hit near Trotwood, Ohio, eight miles (12 kilometers) northwest of Dayton. Several apartment buildings were damaged or destroyed, including the Westbrooke Village Apartment complex, where an aerial photo shows the roof blown off entirely.

Just before midnight, not 40 minutes after that tornado cut through, the weather service tweeted that another one was traversing its path, churning up debris densely enough to be seen on radar.

The aftermath left some lanes of Interstate 75 blocked north of Dayton. Trucks with plows were scraping tree branches and rubble to the side to get the major north-south route reopened, according to Matt Bruning, a spokesman for the Ohio Department of Transportation.

Trying to clear the debris in the middle of the night is a difficult task, complicated by darkness and downed power lines, Bruning said.

“We’ll do a more thorough cleaning after we get lanes opened,” he told The Associated Press by text early Tuesday, noting that tow trucks would have to haul off damaged vehicles along the roadway, too.

In Trotwood, Mayor Mary McDonald reported “catastrophic damage” in the community of some 24,500 people. Hara Arena, idled in recent years after decades as a popular sports and entertainment venue, sustained “a huge amount of damage.”

The mayor said five busloads of displaced residents have been taken to a church offering temporary shelter while the American Red Cross assesses needs.

In Brookville, west of Dayton, the storm tore roofs off schools, destroyed a barn and heavily damaged houses.

Crews were also clearing debris in two other counties northwest of Dayton.

In Dayton, the storm caused a few minor injuries but no reported fatalities. Dayton Fire Chief Jeffrey Payne called that “pretty miraculous” during a Tuesday morning briefing. Payne attributed the good news to people heeding early warnings about the storm.

Residents say sirens started going off around 10:30 p.m. Monday ahead of the storm.

Mayor Nan Whaley urged residents to check on neighbors, especially those who are housebound. Multiple schools in the area were closed or had delayed starts Tuesday.

City Manager Shelley Dickstein said a boil advisory has been issued for residents after the storms cut power to Dayton’s pump stations, and that generators are being rushed in.

The response will require a “multi-day restoration effort,” utility Dayton Power & Light said in an early morning tweet. The company said 64,000 of its customers alone were without power.

In Montgomery County, which includes Dayton, Sheriff Rob Streck said many roads were impassable. The Montgomery County sheriff’s office initially said the Northridge High School gymnasium would serve as an emergency shelter in Dayton but later said it wasn’t useable.

The latest apparent tornadoes came two nights after a twister struck a motel and mobile home park in El Reno, Oklahoma, killing two people and injuring 29. President Donald Trump tweeted Tuesday morning that that he spoke from Japan with Oklahoma Gov. Kevin Stitt and told him that the Federal Emergency Management Agency and the “federal government are fully behind him and the great people of Oklahoma.”