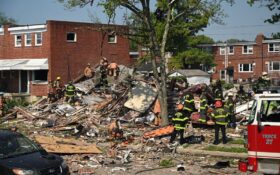 A natural gas explosion destroyed three rowhomes in Baltimore on Monday, killing a woman and trapping other people in the wreckage. At least two people were hospitalized with serious injuries, firefighters said.

At least three dozen firefighters converged on the disaster scene, where the natural gas explosion reduced to the homes to piles of rubble and pieces of debris. A fourth house in the row was partly destroyed, and the neighborhood was strewn with glass from shattered windows.

Two of the homes’ occupants were taken to hospitals in serious condition, while an adult woman was pronounced dead at the scene, the fire department tweeted. The firefighters’ union tweeted that special rescue operation units were searching for other people.

Kevin Matthews, who lives on the block, The Baltimore Sun that he could hear trapped children shouting: “Come get us! We’re stuck!” shortly after the explosion. He said firefighters were arriving by then and he got out of their way while they searched for the survivors.

The Baltimore Gas and Electric Co. received an “initial call” from the fire department at 9:54 a.m. on Monday and was working to turn off the gas to buildings in the immediate area, its spokeswoman Linda Foy said.

“We are on the scene and working closely with the fire department to make the situation safe,” she said, without answering any questions from reporters. “Once the gas is off, we can begin to safely assess the situation, including inspections of BGE equipment.”

While the cause of the explosions wasn’t immediately clear, The Sun reported last year that dangerous gas leaks have become much more frequent in recent years, with nearly two dozen discovered each day on average, according to the utility’s reports to federal authorities. BGE is the nation’s oldest gas utility with origins dating to 1817, and thousands of miles of obsolete pipes need to be replaced, a job the utility estimated would cost nearly $1 billion and take two decades, the newspaper said.

Diane Glover, 56, and her 77-year-old father, Moses Glover, were at home in a rowhouse across the street from the homes that were leveled by the blast. She heard a massive explosion that shook their house, knocking over a fan and some of her DVDs.

“I jumped up to see what was going on. I looked out the bathroom window and there was a house on the ground,” she said. “It sounded like a bomb went off.”

The explosion shattered their windows and blew open her front door, bending the door frame. She saw debris and broken glass everywhere.

Neighbors scrambled toward the rubble, calling out for survivors until firefighters and police officers responded and took over.

“It’s a disaster. It’s a mess. It’s unbelievable,” she said about two hours after the blast. “I’m still shaken up.”