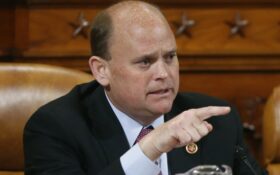 An upstate New York congressman said he and his family were threatened with a dead animal and a brick bearing a family member’s name at his home Friday.

The brick and the animal were found at Republican Rep. Tom Reed’s house after 10:30 a.m., according to the Corning Police Department, which said it was working with state police and federal agencies to investigate, according to WIVB-TV.

Neither Reed nor police specified what kind of animal it was or provided other details.

“The cowards used a dead animal and a brick with a family member’s name on it to try to intimidate us,” Reed said in a statement released by his office. “We assure everyone such threats only energize us to stand stronger.”

Reed represents New York’s 23rd Congressional District, which covers a large swath of the state north of the Pennsylvania border.

He faces Democrat Tracy Mitrano in the Nov. 3 election.