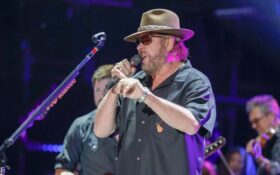 The 27-year-old daughter of country singer Hank Williams Jr. was killed in a highway accident in Tennessee, police said.

Katherine Williams-Dunning of Springville was the driver of an SUV that was towing a boat when it crossed the median and rolled over Saturday night on U.S. Route 79 northeast of Paris, said Tennessee Highway Patrol spokesman Lt. Brad Wilbanks.

Her husband, Tyler J. Dunning, 29, was a passenger in the vehicle. He was airlifted to a Nashville hospital, news outlets reported. His condition was not immediately released.

Country star Travis Tritt wrote on Twitter that the news was “heartbreaking.”

“My family and I knew Katie ever since she was a kid,” Tritt said. “I cannot even imagine what Hank, Mary Jane and the rest of the Williams family are going through right now.”

Wilbanks said the accident remains under investigation. Paris is about 110 miles (177 kilometers) west of Nashville.