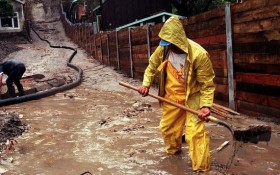 Meteorologists say the current El Nino weather pattern has tied 1997-1998 as the strongest ever recorded.

Mike Halpert, deputy director of the federal Climate Prediction Center, said initial figures for October-November-December match the same time period in 1997 for the strongest El Nino. Meteorologists measure El Nino based on how warm parts of the central Pacific were for three consecutive months. Records go back to 1950.

El Nino is the natural warming of the central Pacific that changes weather worldwide, including bringing more rain to California.

Halpert said what really matters is what El Nino does during January, when its impact peaks.

Weather Underground meteorology director Jeff Masters said “Darth Nino may finally have California in its sights,” as a series of storms may dent record drought.