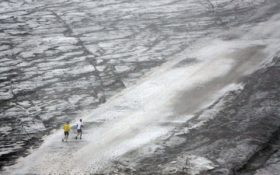 A rockslide and avalanche stranded 13 bicyclists for about eight hours on the scenic Going-to-the-Sun Road that winds through Glacier National Park.

Park officials say the cyclists were cold but otherwise not hurt Monday.

The park had closed the road to pedestrian and bicycle traffic after a significant rockslide blocked the road and prevented emergency vehicle from traveling. But many cyclists had already traveled past that point.

Park officials say an avalanche blocked the road, preventing the bicyclists from returning to West Glacier.

A road crew cleared the rockslide and then cut a path through the avalanche debris to free the cyclists.

It’s not uncommon for park visitors to become trapped by a slide once or twice a year.