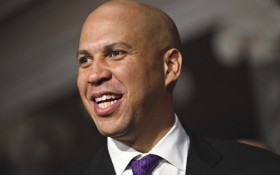 U.S. Sen. Cory Booker on Friday declared his bid for the presidency in 2020.

His sweeping call: a common purpose.

But the former Newark, New Jersey mayor is already receiving some heavy doubt that comes from his past work. Many of the left have criticized Booker for receiving donations from big pharma (Pfizer and Merck as well as Wall Street. It casts a shadow of doubt over the candidate within his own ranks, not even to mention Republicans. It’s been leading to speculation as to how he’ll be received by the far-left liberals he stands beside.

Right now, the Democrats have anything but a common purpose.

The New Jersey Democrat, who is the second black candidate in a primary field that’s already historically diverse, delivered his message of unity amid an era marked by bitter political division.

“I believe that we can build a country where no one is forgotten, no one is left behind; where parents can put food on the table; where there are good-paying jobs with good benefits in every neighborhood; where our criminal justice system keeps us safe, instead of shuffling more children into cages and coffins; where we see the faces of our leaders on television and feel pride, not shame,” Booker said in a video message to supporters.

“It is not a matter of can we, it’s a matter of do we have the collective will, the American will?” he added. “I believe we do.”

Booker was most recently in the headlines for what he claimed was his “I am Spartacus” moment. The moment came when Booker got his turn to aggressively try to rebuke President Donald Trump’s supreme court pick, Judge Brett Kavanaugh. Booker released confidential documents during the confirmation hearing procedures–knowing he could be booted from the Senate for it–and proceeded to do it anyway.

Booker enters what’s shaping up to be a crowded presidential primary, with three of his fellow Democratic senators — Elizabeth Warren of Massachusetts, Kamala Harris of California and Kirsten Gillibrand of New York — already either declared or exploring a run. But he’s spent months telegraphing his intentions to join the race, visiting the early-voting states of Iowa, New Hampshire and South Carolina to build connections with key powerbrokers.

But that doesn’t mean the 49-year-old’s path to the nomination will be easy. As many as five more Democratic senators could soon mount their own primary bids, creating a competition for voters’ attention, and several of Booker’s rival presidential hopefuls bring higher name recognition to a race that may also feature popular former Vice President Joe Biden.