4 words that will END Robert Mueller - The Horn News 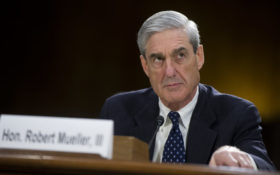 Judicial Watch won an FOIA (Freedom of Information Act) lawsuit against the Department of Justice this year and gained access to 145 pages of former Deputy Attorney Rod Rosenstein’s communications.

And they discovered a very strange email to Mueller — one that critics say is proof of internal corruption and anti-Trump bias.

Three days after Comey was fired, on May 12, 2017, Rosenstein sent a cryptic email to Mueller, which read, “The boss and his staff do not know about our discussions.”

On May 16, Rosenstein emailed the former George W. Bush administration Deputy Attorney General Mark Filip, writing, “I am with Mueller. He shares my views. Duty Calls.  Sometimes the moment chooses us.”

Those simple words: “I am with Mueller.”

“Sometimes the moment chooses us.”

And just one day later, on May 17, Mueller was appointed to the special counsel position. The rest became history.

Rosenstein had the idea to appoint Mueller after “discussions” they had some time prior. What they conversed about exactly remains unknown.

But whatever “duty” Rosenstein was referring to sounds an awful lot like an anti-Trump plot based on his previous emails. Remember, at the same time then-Acting FBI Director Andrew McCabe’s memos — also obtained by Judicial Watch — revealed that Rosenstein offered to wear a wire in the Oval Office to spy on the president.

The bread crumbs seem to point right to a Deep State conspiracy.

And as time passes, only the truth will be revealed.

Democrats, liberals and anti-Trump whistleblowers may have used Russia, just as they’re using Ukraine, to divert attention away from the fact that they’ve all been in on the corruption since day one.

You can access Judicial Watch’s DOJ document by clicking this here.