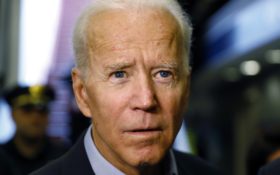 Former Vice President Joe Biden proved once again that the only person who may be able to beat Joe Biden is… Joe Biden. And it bodes very well for President Donald Trump.

Saturday night Biden had yet another forgettable moment — literally.

The blunder was embarrassing — and has others questioning the age of Biden.

Thatcher served as Prime Minister of the U.K. nearly three decades ago, and she passed away in 2013. Six years she has been gone and Biden couldn’t remember it to save himself.

It’s part of a growing list of Biden bloopers already in the 2020 Democratic presidential primary — whether it’s him stammering through a campaign announcement speech or it’s his staff having to cover him from media questions.

But the media doesn’t care — they’re too busy attacking Trump.

Liberals have spent three years to accuse the commander-in-chief of being mentally unstable. The Intercept interviewed psychologists that called the president unfit for office.

Trump, who is guiding the best economic boom in history, is mentally unfit — but Biden can’t even remember whose alive and whose dead, and not a peep from the media?

At this point, it’s not surprising.