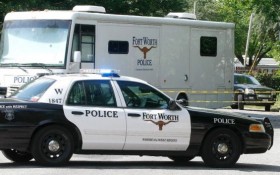 Talk about morons. According to the Associated Press, two suspects in a drug store burglary in Roswell, Georgia chose one of the worst possible places to make their getaway: the police station.

Police say the men ran from the business, ending up at the back gate of the Roswell police station.

Roswell police say an officer on patrol heard an alarm coming from the Wender and Roberts Pharmacy around 3:30 a.m. Wednesday.

Police say the officer spotted three men wearing masks and gloves run from the business. One was taken into custody, but two others fled.

Authorities say a police dog tracked the two fleeing suspects to the rear gate of the Roswell Police Department, where both were apprehended.