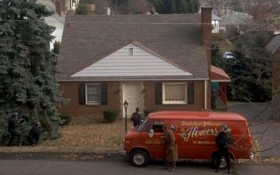 Celebrate your purchase of this lovely four-bedroom Victorian with some fava beans and a nice Chianti.

The Pennsylvania house that was used as the home of psychotic killer Buffalo Bill in the 1991 film “The Silence of the Lambs” is up for sale.

The production crew took six weeks to turn the 3-story house into the squalid home of the killer played by Ted Levine. A film crew spent three days shooting in the foyer and dining room of the home near Perryopolis, about 30 miles southeast of Pittsburgh.

The owners, Scott and Barbara Lloyd, both 63, were married in that foyer on Feb. 13, 1977, a couple of months after buying the house.

“It’s rather bittersweet,” Barbara Lloyd told the Pittsburgh Tribune-Review (http://bit.ly/1JhRQGl ). “We got married in this home, we raised our son in this home, but we are ready to move on.”

The Lloyds are asking $300,000 for the home, which also features an in-ground pool and a vintage caboose as pool house.

About that: The basement dungeon where Buffalo Bill kept one would-be victim, and where he was eventually killed, doesn’t exist. Those scenes were shot on a sound stage, Scott Lloyd said.

Still, real estate agent Dianne Wilk is hopeful that the 1910 home’s spooky pedigree will attract rather than repel buyers. Wilk said she could even envision someone turning the house into a bed-and-breakfast with a horror theme.

“People love to be scared,” Wilk said. “I could see somebody doing something fun with this.”