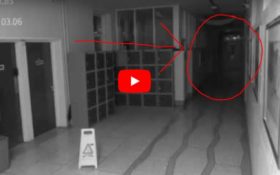 The security footage from a historic school in Cork, Ireland is not for the faint of heart — and it has experts baffled.

In the Oct. 1 footage, the camera at Deerpark School in Cork, Ireland captured an unexplained series of events that left viewers wondering: Is this proof of a poltergeist?

In the film, doors slam, papers fly, and lockers rock back-and-forth for seemingly no reason at all.

The principal of the school, Headteacher Aaron Wolfe, says he was baffled after discovering the footage, which was captured because motion sensors detected the anomaly and automatically turned on the security camera at 3:00am local time.

“If it’s a prank we don’t know how it was done? Motion sensors were set off at this time, that’s how it was caught,” Wolfe told UNILAD.

Even more eeire is where the footage was captured — right outside the room where the Irish school children are taught about Christianity.

“The female members of staff do complain that this particular part is extremely cold,” Wolfe said. “It’s also outside the Religion Room – which is weird.”

The school — the oldest in the historic city — has been subject to multiple eyewitness sightings throughout it’s long history as well.

“Our caretaker has worked in the school for over 30 years he recalls many stories of ‘paranormal activity’,” Wolfe said.

Watch the footage yourself here —

What is your opinion? Prank… or poltergeist? Comment below and let us know.