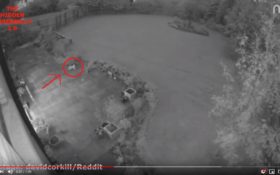 A creepy presence in Ireland has left one family with chills going down their spine just in time for Halloween.

On Oct. 10, a Reddit user posted a spooky video from their home security system, and it had many people wondering: Did we just see a ghost cat?

In the film, a cat suddenly appears on the homeowner’s backyard patio and stares up at the camera before running off into the distance.

Before jumping onto the man’s lawn, the cat seemingly disappears into nothing.

Is this footage proof that ghosts do exist?

Or could the security system have experienced a glitch in that moment?

Many Reddit users responded to the man’s video suggesting that the cat may have disappeared into the bushes along the edge of his patio.

The homeowner responded, that they “aren’t really bushes that things can hide in.”

Another user explained that their three cats also disappear or a rendered as ghosts on their home security system due to the footage being compressed.

“Unless, of course, my cats can teleport – which I would love to believe,” the Reddit user joked, “but, you know… which is more likely?”

See the footage for yourself and decide —