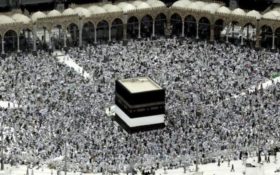 A plague that seems straight out of the Bible’s Old Testament has hit the Muslim holy capital of Mecca — the first time in recorded history such an event has occurred.

Inside Islam’s holy city, the Grand Mecca itself has been swarmed by hordes of flying locust.

The unexplained event has left authorities struggling to clean up. According to Newsweek, “The Holy Mecca Municipality issued a statement Monday responding to the swarm of so-called ‘night cockroaches,’ saying it had dispatched ’22 teams consisting of 138 individuals and 111 devices'” to clean up.

Arabic social media has been abuzz with reports about the incident.

Given the potential Biblical implication of the swarm, there’s naturally been speculation on whether there is a religious undertone by social media users.

So far, though, nothing has been reported other than hundreds of thousands of flying pests swarming the Islamic sites —

Every year, millions of Muslim believers travel to Mecca for their annual pilgrimage called the Hajj.

As one of the five pillars of Islam, the Hajj is required by all Muslims at least once in their lifetime.