Cream of Wheat, Mrs. Buttersworth brands to be pulled from shelf? - The Horn News 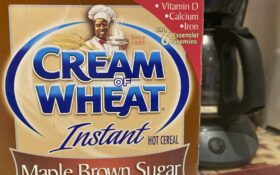 Colgate, Cream of Wheat and Mrs. Butterworth are the latest brands reckoning with racially charged logos.

The toothpaste, which is popular in Asia, was called Darkie when it was first introduced in the 1930s. Packages featured a drawing of a minstrel singer in blackface with a wide smile; a Hawey & Hazel executive came up with the logo after visiting the United States and seeing Al Jolson perform. The Chinese name on the box translated to “black man toothpaste.”

Colgate-Palmolive acquired a 50% stake in Hawley in 1985. In 1989, the name of the toothpaste was changed to Darlie and the logo was changed to a racially ambiguous figure in a top hat. But Colgate said the product is under further review.

“We are currently working with our partner to review and further evolve all aspects of the brand, including the brand name,” the company said in a statement.

B&G Foods Inc., which makes Cream of Wheat hot cereal, said Wednesday it is initiating “an immediate review” of its packaging. A smiling black chef holding a bowl of cereal has appeared on Cream of Wheat packaging and in ads since at least 1918, according to the company’s web site.

“We understand there are concerns regarding the Chef image, and we are committed to evaluating our packaging and will proactively take steps to ensure that we and our brands do not inadvertently contribute to systemic racism,” Parsippany, New Jersey-based B&G said in a statement.

Chicago-based Conagra Brands, which makes Mrs. Butterworth’s syrup, said its bottles — which are shaped like a matronly woman — are intended to evoke a “loving grandmother.” But the company said it can understand that the packaging could be misinterpreted. Critics have long claimed that the bottle’s design is rooted in the “mammy” stereotype.

“We understand that our actions help play an important role in eliminating racial bias and as a result, we have begun a complete brand and packaging review on Mrs. Butterworth’s,” Conagra said in a statement.

The changes are the latest signal of the powerful cultural moment unleashed by the Black Lives Matter protests, which have spread around the world and prompted companies to rethink their policies and products.

On Thursday, Yelp announced it was partnering with My Black Receipt, a group that is encouraging people to spend $5 million at black-owned businesses through July 4. Yelp said it’s adding a free search function for consumers to easily find businesses that identify themselves as black owned.