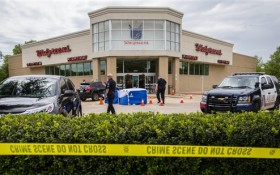 Philadelphia police are seeking a mob of people, mostly teens, who looted a pharmacy.

Police on Tuesday released video that shows about 60 people flooding into a Walgreens on South Street around 10 p.m. on July Fourth.

Some are shown knocking items off shelves while others are shown fleeing with merchandise.

Police Capt. Sekou Kinebrew tells WPVI-TV a cashier who tried to intervene was hit on the head with a glass bottle.

Kinebrew says between stolen items and damaged property, there was $6,000 to $7,000 in damage.

The group earlier had stopped traffic while running along South Street, a busy thoroughfare lined with shops and restaurants.

You can watch police footage of the mobbing below: