[Crazy!] Police on the hunt to return an EAR to owner - The Horn News 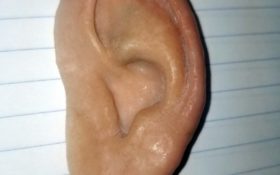 Police in Florida trying to find the rightful owner of a prosthetic ear that washed up on their beach got a happy phone call from South Carolina on Thursday.

Hall said the Beaufort couple was vacationing in the Tampa Bay area when the man went swimming. She said he was trying to put the ear in his pocket for safekeeping when “a wave knocked it off his hand.”

The police department posted a photo of the left ear, saying a local resident found it in the sand on Saturday after the “World’s Strongest Man” contest on Anna Maria Island.

Prosthetic ears can cost thousands of dollars. Hall said the department will mail it to South Carolina.

“We will put it in box. I hope nobody sees it and freaks out,” he said.