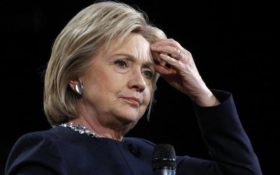 It was the NIGHTMARE before Christmas… for the Clintons!

Just before the holiday, an explosive hearing unfolded in Washington that could spell DOOM in 2019 for Bill and Hillary Clinton.

But the media ignored it, so most people missed it.

But what happened in that committee hearing looked more like the Fourth of July!

BOMBSHELL after BOMBSHELL dropped, including allegations of:

The raucous hearing involved two whistleblowers who claim they’re sitting on a trove of 6,000 pages of documents related to the Clinton Foundation.

Financial analysts John Moynihan and Larry Doyle dropped these bombs before the House Oversight Committee at the invitation of its chair, Rep. Mark Meadows (R-NC).

The two claimed to have conducted interviews and analyzed public records to see where the money “donated” to this “charity” was going.

“We attempted to reconcile all those donations with expenses,” said Moynihan, according to The Epoch Times. “The basis of our claim is that we were unable to do that.”

Their analysis revealed that 60 percent of the Clinton Foundation’s money went to salaries, travel and grants, the Epoch Times reported.

That’s about four times what it should be for a normal charity operation.

They’re alleging that it’s not acting like a charity at all, and in any case went far beyond its supposed mission of soliciting money for Clinton’s presidential library.

They said that means the Clintons could owe taxes on between $400 million and a stunning $2.5 billion in donations.

The pair said they found examples of “pay to play” donations to the charity when Hillary Clinton was secretary of state. And they claim to have evidence that Bill Clinton “mixed and matched, on an ongoing basis, his business with that of the foundation.”

The hearing took a bizarre turn when the witnesses, who had been invited by GOP lawmakers, began to clash with those same lawmakers.

Republicans wanted them to turn their documents over to the committee, but were rebuffed

The pair said they’ve already handed everything over to the FBI and IRS. The Washington Examiner reports they’re hoping to cash in as a result of a possible IRS probe into the foundation, since the agency sometimes pays whistleblowers for information that leads to recouped tax payments.

Washington Monthly believes the pair could net as much as $120 million if the feds find evidence of fraud and force the Clintons to pay up.

Republicans were frustrated by that explanation and slammed their own witnesses.

“I feel like you’re using us for your own benefit,” Rep. Jody Hice (R-Georgia) said, according to The Examiner, calling it “a little game.”

But given that Republicans are about to lose control over the committee and Democrats are about to take over, keeping the documents just might be the smartest move of all.

Rather than give incoming Democrats control over them – including the ability to make selective political leaks – they can leave everything in the hands of federal investigators.

That wasn’t the only bad news closing out 2018 for the Clintons.

Fox News reported that Clinton Foundation donations plunged by 58 percent after Hillary Clinton lost to Donald Trump in the 2016 election.

A spokesman for the foundation told the New York Post the drop is just the result of certain programs winding down that year.

But some analysts believe that’s a sure sign some of those donors were only contributing because they were hoping to influence a future president.

When she lost, they stopped paying.

Meadows told Fox News that the drop in income “raises grave concerns their operations were not above board as the American people have been led to believe.”

He added: “Anyone who uses public office to sell access for their own financial benefit must be held accountable.”

That would be a first for the Clintons.