Crack pipes, prostitution and terrorists: Your tax dollars fund WHAT?! - The Horn News 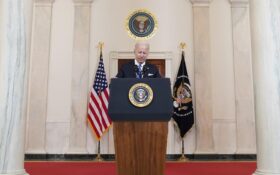 Americans are tightening their belts thanks to the worst inflation since 1981, but there’s one entity that never has to cut back because of high prices: the federal government.

Even as America slips into a recession, the government keeps piling up spending—and debt—on some of the most egregious and indefensible items imaginable. Not only are Washington politicians spending taxpayers’ hard-earned dollars on programs we can’t afford in this economy, but the Biden administration has shown a unique talent for funding items no government should pay for under any circumstances. Here are just a few of the worst examples:

As part of its anti-COVID program, the federal government gave more than $117,000 to at least six massage parlors exposed as houses of prostitution.

For instance, the feds cut a $10,000 check to a business named the Best Chinese Massage in Pete Buttigieg’s hometown of South Bend, Indiana.

In June, undercover officers busted the location for soliciting. One day later, the officers revealed that they had used interpreters fluent in Mandarin Chinese to interview the women, and found at least a dozen women had been trafficked against their will in the four locations busted in St. Joseph County.

It was the same story at Pine Therapy near Denver, which received $14,000 in federal COVID relief. Agents found it was a den of prostitution, where the owners used Chinese women’s illegal immigration status to force them into sex slavery. The feds slapped the three owners with 53 felony charges in April.

At least $15,000 of these funds came from the Small Business Administration’s Economic Injury Disaster Loan Advance program, according to the Washington Free Beacon.

It’s not enough that drag queens are reading books to young children in America’s libraries: They’re also putting their hands into your wallet.

When investigative reporters exposed the Biden administration’s plan to distribute crack pipes to the nation’s addicts at taxpayers’ expense, the administration called them liars. But the evidence continues to pile up that it’s Biden who’s being less than honest about the program.

The latest evidence is in Maine, where two organizations that received part of a $1.2 million Biden administration grant are passing out crack and meth pipes. One is a blasphemously titled “Church of Safe Injection,” which says it fights for the “dignity of people who use drugs (PWUD).”  Another is Maine Access Points. Both gave crack pipes to a reporter for the Free Beacon, and the good “church” also gave the reporter a meth pipe.

Just days ago, President Joe Biden took a victory lap for killing the lead of al-Qaeda, Ayman al-Zawahiri. But he left out the fact that the native Egyptian was living free and in the open in Afghanistan which, thanks to Biden’s withdrawal last year, is now run primarily by the Taliban—the same terrorist-aligned group that gave al-Qaeda safe haven during 9/11.

Biden now wants to reward the Taliban with tens of millions of dollars. He just topped up foreign aid to the terror-friendly Islamic theocracy by $55 million—bringing total U.S. aid to $1 billion.

What are we getting for our money? Possibly the next 9/11.

BULLETS… FOR THE INTERNAL REVENUE SERVICE?

When Americans think of the IRS… we get headaches. But once that clears, we usually think of an IRS agent as a nerdy pencil-pusher looking over his thick glasses at your financial records.

Congress’s Government Accountability Office revealed the IRS employs at least 2,100 law enforcement officers—and they’re armed. The watchdog group OpenTheBooks.com revealed two years later that the IRS had stockpiled at least 4,500 weapons. The IRS has at least 5 million rounds of ammunition in its coffers—and has spent three-quarters of a million dollars buying up ammo this year alone.

“Why is Biden trying to weaponize the IRS?” asked Rep. Jeff Duncan (R-S.C.).

“Why is Biden trying to weaponize the IRS?” @RepJeffDuncan said.

The #IRS stockpiled 5 million rounds of ammunition and spent $725,000 on bullets this year, said @RepMattGaetz, who introduced a bill to block future ammo purchases by the agency. https://t.co/NuUBxYLOUz

A few members of Congress aren’t waiting for Biden to come up with a lie: They’ve introduced the “Disarm the IRS Act,” which would ban the IRS from buying any more ammunition.

These are just a few of the worst programs your tax dollars are funding—and only the ones known to the public.

While you’re cutting back on your family’s budget, the federal government still spends like a drunken sailor on hookers, ammunition, and drugs. But even a drunken sailor would never fund foreign terrorists.

However, the Biden administration isn’t drunk. It’s only treacherous, and it’s forcing you to foot the bill.