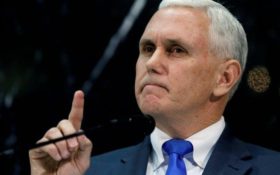 House Minority Leader Nancy Pelosi has her sights set on reclaiming control of the House of Representative for liberals in 2018, warned Vice President Mike Pence.

Speaking at the Conservative Political Action Conference in Washington, D.C. in front of thousands of conservatives on Thursday, Pence outlined the new “playbook” heading into the 2018 midterm election: Grassroots conservative action.

And if American conservatives speak out, Pence promised, Pelosi will never be in charge again.

Speaking on the historic tax cuts put into action last month, Pence warned that the fight for the soul of America was only beginning.

“I dunno if you’ve heard, but the woman that wants to be Speaker of the House again, Nancy Pelosi, said the tax cuts would be Armageddon before they passed. She said it’s unpatriotic to let Americans keep what they’ve earned,” Pence told a cheering crowd of thousands.

“She said that a thousands dollar bonus to Americans is ‘crumbs,'” Pence quipped. “When our kids were little, we had a term for another thousand dollar paycheck at the end of the year: Christmas.”

“These bonuses have meant real money that have helped Americans across this country,” Pence continued. “Any leader that says a thousand dollars to Americans is ‘crumbs’ is out of touch with the American people.  It would be a disaster to our cause if Nancy Pelosi became Speaker of the House again, but we’re not going to let that happen.”

“The far-left has watched with dismay as we’ve dismantled the liberal legacy of the last administration and turned this country around. We don’t have to wonder what would happen if Pelosi and Shumer’s party win in November,” Pence said. “I was there the last time Democrats were in charge, and they nearly destroyed America.”

Pence then began laying out the plan to dismantle Pelosi and the Democratic Party’s chance to retake control of Congress: Grassroots action by motivated conservatives.

“Let this be the day that we as a movement we decided to deliver another victory for the American people in 2018. We threw out the playbook in 2016 and we’re going to throw it out in 2018. Today, on behalf of President Trump and our administration, I’m asking every person in this movement to go home and talk to your friends and neighbors about what they don’t hear in the media.”

Pence said, tell them how Trump is “making a difference in our lives and our nation. Thanks to our administration, confidence is coming back. Jobs are coming back.”

“Just tell them: America is back.”

— Stephen Dietrich is the Associate Publisher at The Horn News. Stay tuned to our website throughout the week as we bring you the latest from the Conservative Political Action Conference (CPAC) 2018