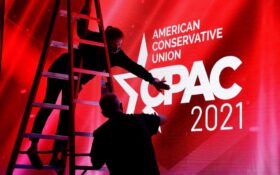 Dozens of prominent conservatives from Europe, the United States and elsewhere gathered in Hungary on Thursday for the American Conservative Political Action Conference, or CPAC, being held in Europe for the first time.

The event has fueled speculation about ties between American conservatives and the government of Hungarian Prime Minister Viktor Orban.

Now in power for 12 years, Orban has garnered the admiration of some segments of the American right for his tough stance on illegal immigration. However, he has also generated controversy in the European Union over his rolling back of lonstanding institutions, like the free press, under what he calls an “illiberal democracy.”

Delivering the opening address of the two-day conference on Thursday, Orban called Hungary “the bastion of conservative Christian values in Europe,” and urged U.S. conservatives to defeat “the dominance of progressive liberals in public life” as he said he had done in Hungary.

“We have to take the institutions back in Washington and Brussels,” Orban said. “We must find allies in one another and coordinate the movements of our troops.”

The CPAC conference is only the latest overture of partnership between Orban’s government and the American right. On the conference website, CPAC refers to Hungary as “one of the engines of Conservative resistance to the woke revolution” which aims to “face down the onslaught of the Left.”

One American proponent of this vision of Hungary is Fox News star Tucker Carlson, who broadcast from Hungary’s capital, Budapest, for a week in 2021, interviewing Orban and praising the country’s policies on immigration and LGBTQ issues as a model to be followed by the United States.

In his address on Thursday, Orban praised Carlson — who earlier delivered a video message to attendees — as the only figure in American media willing to stand up against “the rule of the liberal media.”

Orban urged the conservative movement to take more control over the media, as he has done in his country — albeit to much criticism from the mainstream media in the U.S. and in much of Europe.

“We can only demonstrate the madness of the progressive left if we have media to help us,” Orban said.

Hungry’s leader has found common cause on many issues with some American conservatives. After taking his oath of office for a fourth consecutive term as prime minister on Monday, Orban shared controversial theories about a “suicide attempt” by more liberal European governments to implement “the great European population replacement program,” which he said seeks to “replace the missing European Christian children with migrants.”

Also appearing at the conference in Budapest are numerous figures from the American right associated with the branch of the Republican party aligned with the European right.

Chairman of the American Conservative Union Matt Schlapp and American conservative media personalities Candace Owens and Ben Ferguson were scheduled to speak at the event, as well as members of right-wing European parties such as Marine Le Pen’s National Rally in France and the Spanish Vox party.

Mark Meadows, the chief of staff for the administration of former U.S. President Donald Trump, will also speak at the conference by video link, along with Republican lawmakers from Florida and Maryland.