Cowardly sheriff, who hid from school shooter, gets job back - The Horn News 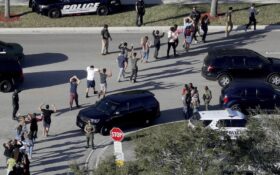 A Florida sheriff’s sergeant fired because he sat in a parked car during a 2018 mass shooting at Marjory Stoneman Douglas High School will get his job back along with back pay, according to a statement from the union that represents deputies.

The arbitrator dismissed the case against Brian Miller after finding that his due process rights were violated when Broward Sheriff Gregory Tony terminated him, the South Florida SunSentinel reported.

A former student gunned down 17 people and injured 17 others when he entered the Parkland, Florida, school on Valentine’s Day with an assault-style rifle. He is currently awaiting trial in Broward County.

On the day of the shooting, the deputy assigned to the high school, Scot Peterson, took cover while the gunman was inside the building shooting students, an investigation found. He was later fired and charged with multiple counts of child neglect.

The shooting exposed widespread failures at the sheriff’s office, and eventually led to the ouster of Sheriff Scott Israel.

Miller was the first supervisor on the scene of the shooting, arriving in time to hear three or four shots, records show. A state commission assembled to investigate the shooting found that Miller took his time putting on a bulletproof vest and hid behind his car.

“Miller failed to coordinate or direct deputies’ actions and did not direct or coordinate an immediate response into the school,” a report from the commission said.