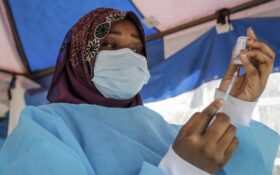 WHO has previously warned that recent surveillance of COVID-19 has been severely compromised by countries reducing their testing, reporting and other coronavirus alert systems. The agency has said COVID-19 figures are likely being significantly underestimated, which could make it more difficult to spot any worrisome new variants.

In the U.K., the Office for National Statistics reported last week that COVID-19 cases dropped to about 1 in 20 people in England infected, suggesting that the latest wave of the coronavirus may have peaked in the country.

Dr. Paul Hunter, a professor of medicine at the University of East Anglia, said it was likely that COVID-19 cases and hospitalizations would continue to fall further in the following weeks.

Other experts warned that measures to prevent COVID-19 should still be taken, saying the health system was still under pressure.

“We have to hope that the incidence of long COVID from this wave will be lower than in the first and second waves,” said James Naismith, director of the Rosalind Franklin Institute at the University of Oxford. He called for people to keep getting vaccinated even as COVID-19 protocols were abandoned, citing the dangers of reinfection.

In China, meanwhile, authorities last week shut down part of Wuhan, the city where COVID-19 was first detected in late 2019, after identifying four cases. The government has suggested its “zero COVID” strategy could last for years, despite the social and economic upheaval the approach has caused.

WHO said in its report that two versions of omicron — subvariants BA.5 and BA.4 — were driving the latest wave of infections across the globe. It said BA.5 accounted for about 64% to 70% of sequences shared with the world’s largest public viral database.