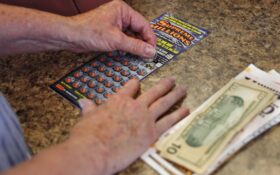 The coronavirus pandemic has been a rollercoaster for state lotteries across the country, with some getting a boost from the economic downturn and others scrambling to make up for revenue shortfalls.

Since March, Texas, Arkansas and Montana and several other states have seen an increase in sales, in part, driven by housebound residents putting cash down for scratch-off tickets. But lottery officials say other states, like Massachusetts and Oregon, confronted revenue drops due to stay-at-home orders that forced the closure of restaurants, bars and some retailers selling tickets. Some also blamed a lack of an online presence, something only a handful states currently allow.

“We got used to lottery as a constant companion supporting the system and it was a gut punch to realize we don’t have the time to react,” said Chris Havel, spokesperson for Oregon Parks and Recreation, which laid off 47 people and closed more than two dozen parks due to a $22 million projected budget shortfall through next year driven in part by a drop in lottery revenues.

State lottery revenues do not make up a huge portion of a state budget. But because the monies are often directed to specific programs like education, environment or veterans programs, they can have an outsized impact when there are upticks or declines in sales.

Massachusetts Treasurer Deborah Goldberg told lawmakers in April that the lottery was hobbled by the closure of claims centers and the lack of an online presence — something that helped neighboring New Hampshire and several other states attract new players. Currently, at least nine states allow online lottery sales, according to the North American Association of State & Provincial Lotteries.

“This pandemic has dramatically exposed the limitations and vulnerabilities of the Lottery’s all-cash, in person business model,” Goldberg said.

The pandemic and the subsequent economic downturn were expected to be a good thing for lottery sales. Past studies have shown a correlation between a rise in unemployment and increase in lottery sales — a trend that prompted an anti-gambling group to unsuccessfully call for states to shut down their lotteries until the coronavirus pandemic ended.

“We have known for some time that people end up playing the lottery more often or with more of their dollars when they get put in dire circumstances, when they have a drop in income,” said Cornell University business professor David Just, who has studied lottery purchases.

“Unemployment is one of the potential big drivers for something like that. We saw that at the beginning of the pandemic,” he said. “Massive rises in unemployment, you would expect, would lead people to this place where they want to take more risks to try and get back what they’ve lost.”

That was the trend in several states, including Arkansas, which saw strong sales in April and May.

Arkansas Scholarship Lottery Director Bishop Woosley attributed the sales spike in his state to low gas prices, a lack of other entertainment options and “people simply being bored and looking for activities that they can do in their own homes.

Similar trends were seen in Montana, which has seen sales increase $1.4 million from March through May to more than $16 million. Much of that has been driven by scratch-off tickets, which jumped 83% compared to a year ago, according to state figures.

Minnesota’s stay-at-home order led to lottery sales dropping in March but roared back in April and May. According to the the monthly data, sales in April increased more than $13 million compared to year ago and more than $29 million in May. A majority of lottery proceeds go to the general fund and another portion to environmental programs.

Texas also saw lottery sales increase more than $155 million this fiscal year and more than $753 million compared to the 2018 fiscal year. A big driver was scratch-off tickets, which increased 10% over the last fiscal year and 22% over sales from 2018 mostly because 20,000 retail locations were deemed essential services, according to Gary Grief, executive director of the Texas Lottery Commission.

But not all state lotteries have benefited from the pandemic.

Delaware’s lottery sales are off almost $40 million through May compared to the last fiscal year, mostly due the closure of casinos with video poker and table games, according to state data. Other factors in several states was a drop in revenue from big-money games like Powerball, which saw lower some jackpots.

Virginia saw sales drop 21%, or just over $45 million in March and in April by 8%, or more than $15 million compared to a year ago. They were up nearly 9% in May but are still down 8% for the fiscal year.

In Massachusetts, sales were down by about 13% in March, 30% in April and around 10% in May, leaving the lottery down 5% for the fiscal year. Unlike Texas, which kept many retail outlets open, Massachusetts temporarily closed more than 1,500 due to the pandemic. That left players with fewer places to spend their money.

Lottery profits go into a larger municipal aid program for the state’s 351 cities and towns, but it’s too early to say the impact on local budgets.

But as states begin to reopen, some of the hardest hit lotteries are bouncing back.

Along with Virginia, Maryland saw its lottery sales recovery after a rocky few weeks. In the midst of the pandemic, lottery officials feared profits would be $50 million below the state’s projections for the fiscal year that ended June 30. Now, officials are expecting profits to be about $10 million below those projections.

Gordon Medenica, Maryland’s lottery and gaming director, recalled weeks in April when sales were down as much as 30% and “we really didn’t know where the bottom was at that point. We were just seeing sales absolutely collapse.”

“Since then, they have rebounded remarkably well. In the month of May, we actually had our all-time best month for the year in both sales and profits,” Medenica said. “Instant tickets have been booming. Our daily numbers games have been booming. Lottery is doing really well.”