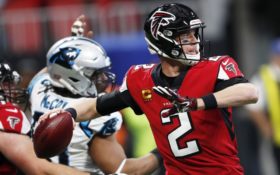 Never mind that Mike McGlinchey is a 6-foot-8, 310-pound offensive lineman for the San Francisco 49ers.

“He’s a kid to me,” Ryan quipped, “but he’s out there playing like a grown man.”

The first cousins will be on opposite sides Sunday when the the NFC-leading 49ers (11-2) host Ryan and the Atlanta Falcons (4-9).

McGlinchey, a second-year player who starts at right tackle, grew up idolizing Ryan. The Falcons quarterback is almost 9 years older, so his younger cousin watched him develop into a high school star in Philadelphia, attended games after he went off to Boston College, and set a goal of following him into the NFL after the Falcons drafted Ryan third overall in 2008.

“All I ever did was try to be like Matt in every way I could,” said McGlinchey, whose mother is a sister of Ryan’s mom. “I would watch his interviews. I would watch everything about Matt. Maybe I just adopted the way he did things because he always did them the right way. It’s pretty easy to learn from a guy like him.”

San Francisco coach Kyle Shanahan, who spent two years as Ryan’s offensive coordinator in Atlanta, noticed the similarities right away when he met McGlinchey for the first time at the combine in Indianapolis.

“I knew Matt Ryan had a cousin in the draft,” Shanahan recalled. “McGlinchey came in and I didn’t know it was him. Just the way he came in and introduced himself to everyone in the room, the way he sat down and talked, right then I was like, ‘Man, this guy reminds me of Matt Ryan.’ Then I looked down at my notes that we get on everyone and it says it’s his cousin.”

Even though they play much different positions, Shanahan said they are “almost like the same guy.”

“They’re both CEOs,” the coach said. “Right when they walk in a room they know everyone’s name, they know how to handle themselves. They are very similar to me. They come from good families, they’ve been raised the right way and they both love football.”

“I was a third or fourth-grade kid,” McGlinchey said. “We would go all the time to watch his games up there, and I just remember being a kid just wishing I could be a part of it.

McGlinchey played collegiately at Notre Dame before the 49ers drafted him No. 9 overall in 2018 — six spots lower than his older cousin, it must be noted.

In the tale of the tape, McGlinchey outweighs Ryan by nearly 100 pounds.

“He was always a monster,” Ryan said with a smile. “I remember as a baby, you were just like, ‘Gosh, this kid is big.’”

But, like his older cousin, he was always quite an athlete, too.

“He was a great basketball player,” Ryan said. “He throws the ball really well. You’d be surprised, man. He can spin it. They used to have him at tight end, to catch balls and stuff like that in high school. He was always just a freak.”

McGlinchey started all 16 games for the 49ers as a rookie, and he’s back in the lineup after a knee injury knocked him out for four games this season. He’s helped transform San Francisco into a potential Super Bowl contender after four straight losing campaigns.

Ryan kept tabs on his cousin while he was recovering from his injury.

“I’m proud of him, man,” the 12th-year quarterback said. “He’s having a great start to his career and obviously enjoying this run that they’re on right now.”

The Falcons have endured a miserable season, though Ryan did become just the 10th quarterback in NFL history to reach 50,000 yards passing in his career.

There will be dozens of family members on hand at Levi’s Stadium to watch them face each other for the first time in the NFL.

Ryan is glad that he won’t be on the field at the same time as his little cousin.

“He’s pretty physical,” Ryan said. “That wouldn’t be fun to get hit by him.”