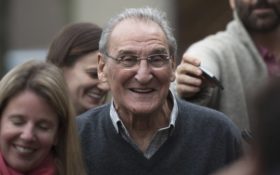 A judge properly considered a legendary airport robbery recounted in the movie “Goodfellas” when she sentenced a reputed mobster to eight years in prison for an unrelated road rage arson, an appeals court said Tuesday.

The 2nd U.S. Circuit Court of Appeals in Manhattan made the determination as it upheld the sentencing of Vincent Asaro, an 84-year-old prisoner scheduled for release in 2022.

A three-judge panel concluded that it was fair for a judge to cite prior crimes in determining the sentence because they all involved Asaro utilizing crime family associates.

Judge Allyne R. Ross in Brooklyn said at a December 2017 sentencing that she was aware of Asaro’s 2015 acquittal in the infamous 1978 armed robbery of $6 million at the Lufthansa cargo terminal at Kennedy International Airport.

In sentencing Asaro, Ross cited proof that Asaro had participated in a 1969 murder and admitted his role in the Lufthansa robbery.

“Those earlier offenses nevertheless informed the court’s assessment of the danger Asaro posed to the community, in light of his ‘lifelong history of violent crime,’” the appeals court said.

“The crime was thus not merely an isolated instance, however reprehensible, of road rage, but an example of his continued ability to exert the power of the underworld to intimidate and harm law-abiding citizens,” the 2nd Circuit said.

The sentence was more than double what federal guidelines set out as punishment for the 2012 car torching that came after an enraged Asaro thought he was cut off by another motorist.

Authorities said he then contacted an associate with access to a local law enforcement database, identified the license plate information of the car and plotted to burn it in front of the motorist’s home.