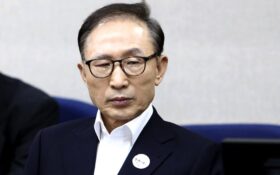 Earlier Monday, Lee was taken from his home to a Seoul prosecutors’ office to be formally notified about his sentence and undergo identification checks there.

Lee, 78, was convicted of taking bribes from big businesses including Samsung, embezzling corporate funds from a company that he owned and committing other corruption-related crimes before and when he served as president from 2008-13.

A Seoul district court initially sentenced Lee to 15 years in prison in 2018. He was bailed out of prison several months later but was taken back into custody this February, after an appellate court handed down a 17-year term and canceled his bail. Days later, however, he was released again after he appealed the ruling on his bail cancellation.

On Thursday, the Supreme Court confirmed the 17-year term.

Lee, a former Hyundai CEO, won the 2007 presidential election on a promise to reinvigorate the country’s economy. But his five years in office were marred by the global financial crisis, massive public protests over the resumption of U.S. beef imports and military animosities with North Korea.

Lee’s corruption case erupted after his successor, fellow conservative Park Geun-hye, was removed from the presidency and jailed over a separate corruption scandal in 2016 and 2017 that sparked one of the biggest anti-government protests in South Korea.