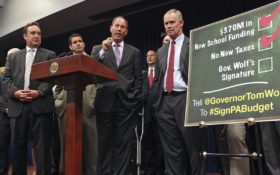 The U.S. Supreme Court on Monday let a court-ordered redrawing of congressional districts in Pennsylvania proceed, raising Democratic hopes that a revamped map might yield them several more seats this fall.

Justice Samuel Alito, who handles emergency appeals from Pennsylvania, rejected the request from GOP legislative leaders and voters to put on hold an order from the state Supreme Court intended to produce new congressional districts in the coming two weeks.

The Pennsylvania high court ruled last month that the current map of 18 districts violates the state constitution because it unfairly benefits Republicans.

The decision comes just four days before the Republican-controlled Legislature’s deadline for submitting a replacement map for Democratic Gov. Tom Wolf to consider. So far, there has been a notable lack of bipartisan movement on getting such a deal.

Pennsylvania’s congressional delegation has been 13-5 in favor of Republicans during the three election cycles since the GOP-drawn 2011 map took effect, and experts have said those 13 seats are several more than would have been produced by a nonpartisan map.

Democrats have about 800,000 more registered voters than Republicans and hold all three elected statewide row offices, but Republicans enjoy solid majorities in both chambers of the Legislature.

Under the process laid out two weeks ago by four of the seven Pennsylvania Supreme Court justices, all Democrats, the Legislature has until Friday to approve a new map, after which Wolf will have until Feb. 15 to decide whether to endorse it and submit it to the justices.

Senate Republican Leader Jake Corman said Monday he’s had “zero” discussions with Wolf and legislative leaders about new district boundaries and could not guarantee he will meet the deadline.

The state Supreme Court said it expects new districts to be in place by Feb. 19, and the new map is expected to be in play for the May 15 congressional primaries.

The two leaders who had gone to Alito in an effort to derail the redistricting process, Senate President Pro Tempore Joe Scarnati and House Speaker Mike Turzai, said in a statement they will do their best to negotiate a new map “but may be compelled to pursue further legal action in federal court.”

Wolf’s statement after the decision called gerrymandering wrong and said a replacement map should correct errors of the past.

“My team is ready, willing and able to work with the General Assembly to ensure a new map is fair and within the clear orders given by the Pennsylvania Supreme Court,” Wolf said.

A redrawn Pennsylvania congressional district map could affect control of the U.S. House, and at last count, more than 60 people in the state have said they plan to run for Congress.

Democrats need at least two dozen pick-ups nationally in November’s election to retake control of the U.S. House, and a Pennsylvania map that is less favorable to Republicans could provide some of those.

There are six congressional seats in Pennsylvania where incumbents are not running again, the most in four decades. Five of them have been held most recently by Republicans.

To accommodate the changes, the Department of State on Friday revised deadlines for congressional candidates, moving their deadlines — and not other races in the state — two weeks later. The last day to file paperwork to run for Congress is now March 20 — it had previously been March 6.

Turzai and Scarnati successfully defended the 2011 plan against a separate lawsuit in federal court and complained that the state court order did not provide sufficient guidance for them to draw a new map.

Corman said he did not know yet whether House Republican leaders are interested in drawing a new map, and he complained that lawmakers lack map-drawing direction because state justices have not published an opinion yet to explain their reasoning.

“Part of our problem is we have yet to hear from the Pennsylvania Supreme Court on why the map is unconstitutional,” Corman said. “Absent that, it makes it difficult for us to meet whatever requirement they are laying out for us.”

A group of voters persuaded all five Democrats on the state’s high court that the map violated the state constitution. The Jan. 22 majority order said new districts should be compact and contiguous and only split counties, cities, towns, boroughs, townships or wards when needed to ensure population equality.

Late last week, Scarnati and Turzai sought recusal of one of the state’s Democratic justices, David Wecht. They argued Wecht had made statements critical of gerrymandering during his successful 2015 campaign that they viewed as evidence of bias. Wecht on Monday denied their request, saying his comments during the campaign were “sometimes ardent” but did not merit dropping out of the case.