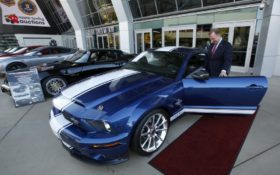 The owners of a San Francisco Bay Area solar energy company pleaded guilty Friday to charges that they plotted a massive Ponzi scheme that defrauded investors of $1 billion.

As part of their plea deal, prosecutors said the husband and wife team from Martinez agreed to forfeit over $120 million in assets, including a fleet of collector cars and v acation homes in the Caribbean, Lake Tahoe and Las Vegas purchased entirely with cash.

Jeff Carpoff, 49, pleaded guilty to conspiracy to commit wire fraud and money laundering, which carry a maximum penalty of up to 30 years in prison, the U.S. Attorney’s office in Sacramento said.

Paulette Carpoff, 46, pleaded guilty to conspiracy to commit an offense against the United States and money laundering and faces up to 15 years in prison.

Prosecutors said the Carpoffs began DC Solar, based in Benicia, as a legitimate company that made solar generators mounted on trailers and marketed them as able to provide emergency power for cellphone companies or to provide lighting at sporting and other events.

However, court papers alleged the company morphed into a Ponzi scheme by telling investors they can take advantage of federal tax credits by leasing the generators back to DC Solar, which would then provide them to other companies for their use.

Prosecutors alleged that the company engaged in $2.5 billion in investment transactions between 2011 and 2018, costing investors $1 billion. Among the investors was Warren Buffett’s Berkshire Hathaway Inc., which lost some $340 million.

“By all outer appearances this was a legitimate and successful company,” Kareem Carter, special agent in charge of IRS Criminal Investigation. “But in reality it was all just smoke and mirrors — a Ponzi scheme touting tax benefits to the tune of over $900 million.”

The Carpoffs used the money from the scheme to buy and invest in more than 150 luxury cars, 32 properties, subscription to a private jet service, a semipro baseball team and a suite at the new Las Vegas Raiders stadium.

The forfeited money will be returned to investors, prosecutors said.

Four others have pleaded guilty in connection with the scheme. They included a general contractor, an accountant and the former vice president of operations for DC Solar.

A seventh co-conspirator is scheduled to plead guilty on Feb. 11.