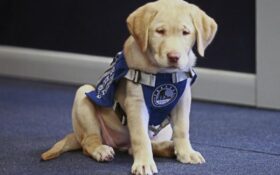 An Aroostook County courthouse is poised to be the first in Maine to have a dedicated therapy dog to provide emotional support for people dealing with traumatic experiences.

A yellow Labrador puppy named Holiday has begun up to two years of training with a goal of becoming a calming presence in a stressful environment.

“A courthouse dog can provide emotional support for everyone,” he said.

The Houlton courthouse already has an unofficial therapy dog — an English Mastiff named Nephi — who can sometimes be found in the office of his owner, Valerie Eldredge, the victim/witness advocate in Houlton.

Holiday will have a much more focused job once she completes her training, said Tyler Jones, owner of Purpose Pups in Houlton who is training Holiday to become an officially licensed courthouse dog.

Karley Allen, owner of Northern Woods Labs, which donated the puppy, said she believes in the power of dogs to heal.

“They are truly heart healers that give endless love and can give so much back to our communities when placed in these roles,” she said.